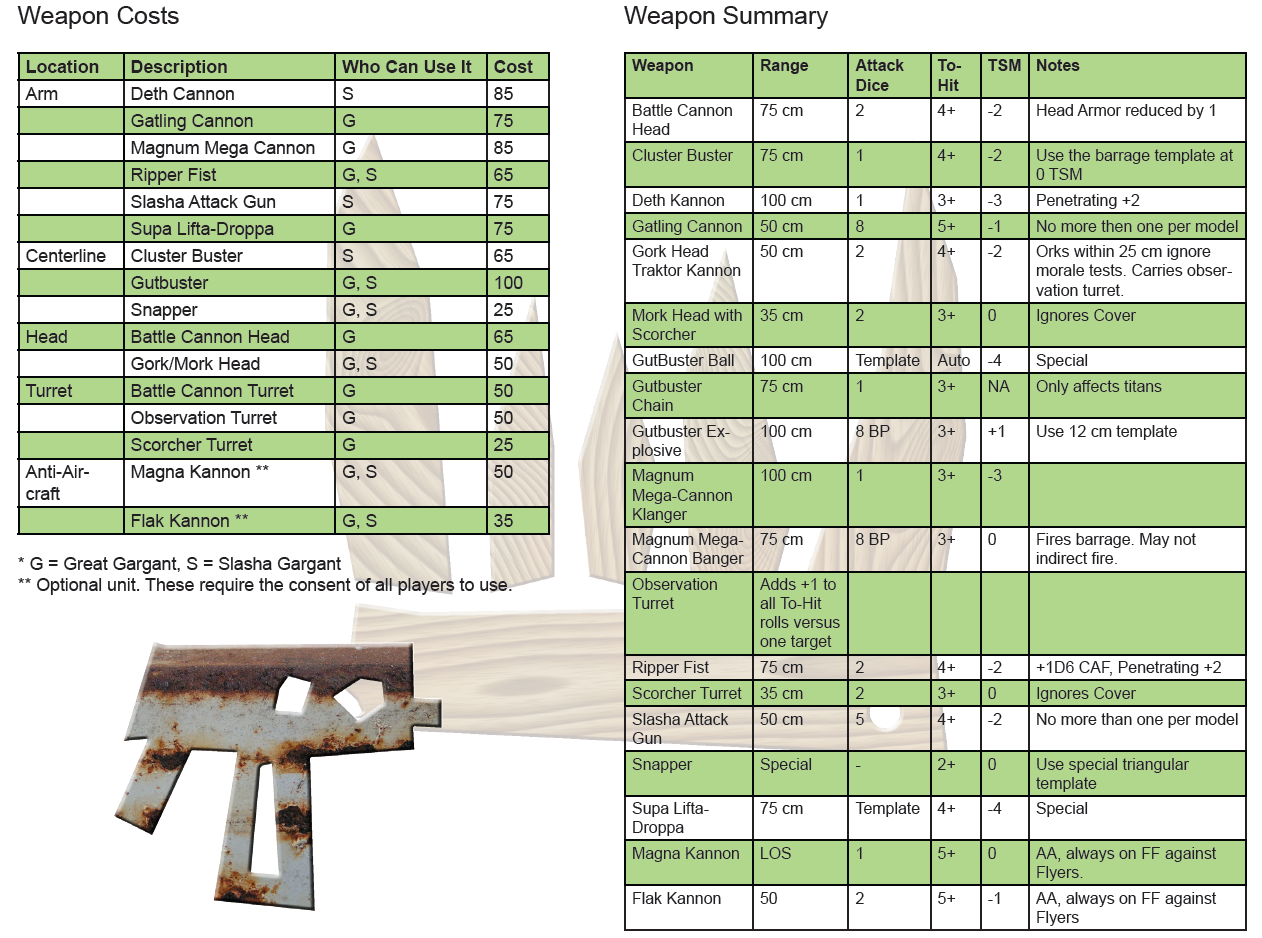 6) Victory Point Bonus: In order to simulate ruthlessness and insure a few senseless massacres, the Iron Hands player scores VP’s both from objectives as normal and for breaking enemy units, then gains +1 VP per enemy detachment that is completely wiped out (removed from the table, one way or another). To balance this out, some of the Iron Hands units give 150% of normal Victory Points to the enemy.
Ca c'est totalement cheaté et le machin pour balancer ne balance que dalle, face à une armée ayant de multiples petites cartes (certaines n'ont pas le choix; chaos démons, tyranides...), c'est très fort.

Primarch a écrit:The net epic gold version, beyond some typo correction, will remain the same.

This is the summary for Chaos gold.

5. Lord of Battles, edit description. As command it can first fire.

11. On the Chaos Marine List, the "Drop Pods" Special Formation adds +5 to the formation's BP. This value should be +7 for Chaos Marines, as their Companies do not have any Rhinos to replace.

Anything else mentioned is for Platinum.


Summary for Eldar in Gold:

7. Master Mime is now a unique special formation (only one can be fielded). Except if the enemy is chaos and the limit is 25% of force maximum.

9. If you select a craftworld list, it may not ally with other craftworlds (use the generic/standard list to mix and match).

10. Correction on eldar titan damage table "4-6 roll for damage on weapon (not reactor).

Everything else mentioned is for the Platinum version.


Here are the updated for IG Gold.

1. All instances of the rhino as command vehicle as to be changed to a chimera except in the case of stormtroopers or other special formation.

Chimera variant armor save is also 4+.

4. Transport appear as support formations. Players can mechanize (or not) according to these alternatives:

Companies with integrated transport will be removed.

Options for gorgon and air cav will be included

7. Salamander versus hellhound to hit on the flame template are inverted (hellhound hit better).

All other things mentioned are for the Platinum version.


Summary for Orks in Gold

Another super heavy unit that is target of a "lifted and dropped" super heavy rolls on the damage table except if its save is better than the heavy being dropped on it.

10. Wierdboy towers. Only one per clan (wierdboy and dethskulls). Note that the rules allow for duplicate clans, so one tower per clan (even duplicates) can be fielded.

11. Shock attack guns. If the unit hits a flier or floater the unit is destroyed only on a roll of "hit + double". Any other result HAS NO EFFECT. Snotlings can't fly....

12. Mekboy repair cards. If they affect vehicles it only effects one squadron of 3-5 vehicles.

All else goes to platinum.


This would be the list of changes to be updated in Gold as extracted from the thread on marines.

1. Marine HQ CAF bonus: +1 over the CAF of the troop type they lead.

3. Veteran Company Cost increased to 950 and detachment to 350. Veterans now have a -1 save modifier.

7. Librarian. Powers are now: Purge (combination of purge psyker and destroy deamon). Mind Blast (unchanged) and Force Dome (this was the most favored power)

9. Special characters may opt for either the rhino transport OR the jump pack ability (no rhino)

Everything Else discussed are things for the Platinum version.


Summary for Squat in Gold

2. increase cost of guild biker company from 600 to 700 points (to reflect new cost of bikes), remove the "unique".

5. increase cost of Leviathan from 350 to 400 points (no change for the IronBreaker company)

7. Edit some of the company compositions for better clarity.

8. Reword for better clarity the process of firing and inflicting damage from the Cyclops.


Summary for Tau in Gold

Everything else is stuff for platinum.


Summary for AMTL in Gold

1.Frontal template for Imperial/chaos titans no longer have the reactor location. Replaced with "leg", save 2+.

Options for weapons linked to plasma reactor with restriction will be included.

a.Chain fist- no change, perhaps the most used one.
b.Power fist/claw- add the ability to re-roll on or both dice, second roll is final. This makes it help to win the combat. No change in other abilities.
c.Laser burner- The laser burner fires as its opponent closes for close combat. It unerringly strikes its target (within the shields, so they offer no protection). The hit scatters normally and once a location is determined roll immediately on the damage table (no modifiers).
d. Power ram- add +2 to CAF to simulate the headlong charge with the ram. All else remains the same.
e. wrecker- unchanged.


ALL heads free, except for those indicated below

All else is Platinum territory


Summary for Tyranids in Gold

All else is in Platinum.